You're Fired... Fast Forward a little bit, We Need You Back.

Long Story Short: These days, it’s common for people to work for many employers over the course of their careers. When an employee who previously left your company tries to come back, how do you determine whether or not you should rehire them? Research shows rehiring these “boomerang” employees can come with some benefits. For example, the cost to train them tends to be lower, and their immediate job performance tends to be better than new hires or internal promotions. But if your organization prioritizes long-term job performance or reducing turnover, you may be better off hiring externally or promoting from within. Before you make any decisions, understand your company’s objectives and priorities. 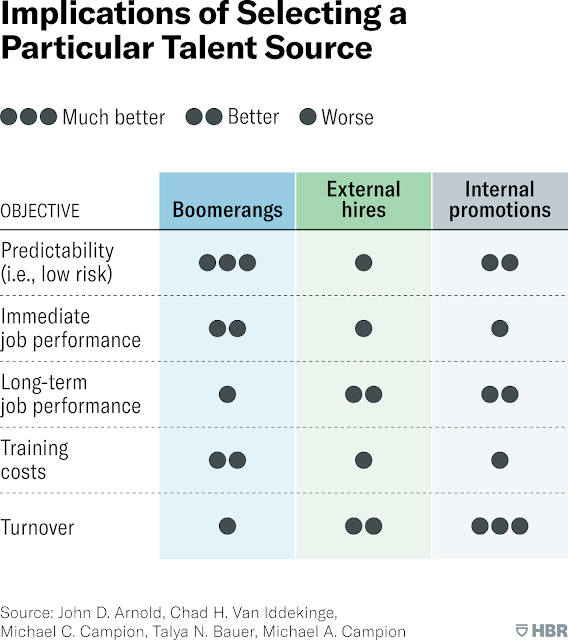 Here's the full text of the Gilbert letter:

"Dear Cleveland, All Of Northeast Ohio and Cleveland Cavaliers Supporters Wherever You May Be Tonight; "As you now know, our former hero, who grew up in the very region that he deserted this evening, is no longer a Cleveland Cavalier. "This was announced with a several day, narcissistic, self-promotional build-up culminating with a national TV special of his "decision" unlike anything ever "witnessed" in the history of sports and probably the history of entertainment."Clearly, this is bitterly disappointing to all of us. "The good news is that the ownership team and the rest of the hard-working, loyal, and driven staff over here at your hometown Cavaliers have not betrayed you nor NEVER will betray you. "There is so much more to tell you about the events of the recent past and our more than exciting future. Over the next several days and weeks, we will be communicating much of that to you. "You simply don't deserve this kind of cowardly betrayal. "You have given so much and deserve so much more. "In the meantime, I want to make one statement to you tonight: "I PERSONALLY GUARANTEE THAT THE CLEVELAND CAVALIERS WILL WIN AN NBA CHAMPIONSHIP BEFORE THE SELF-TITLED FORMER ‘KING’ WINS ONE" "You can take it to the bank."If you thought we were motivated before tonight to bring the hardware to Cleveland, I can tell you that this shameful display of selfishness and betrayal by one of our very own has shifted our "motivation" to previously unknown and previously never experienced levels. "Some people think they should go to heaven but NOT have to die to get there. "Sorry, but that's simply not how it works. "This shocking act of disloyalty from our home grown "chosen one" sends the exact opposite lesson of what we would want our children to learn. And "who" we would want them to grow-up to become. "But the good news is that this heartless and callous action can only serve as the antidote to the so-called "curse" on Cleveland, Ohio. "The self-declared former "King" will be taking the "curse" with him down south. And until he does "right" by Cleveland and Ohio, James (and the town where he plays) will unfortunately own this dreaded spell and bad karma. "Just watch. "Sleep well, Cleveland. "Tomorrow is a new and much brighter day.... "I PROMISE you that our energy, focus, capital, knowledge and experience will be directed at one thing and one thing only: "DELIVERING YOU the championship you have long deserved and is long overdue.... "

A stellar employee leaves your company for another job. Perhaps they were lured by a recruiter offering an enticing salary and impressive perks, or maybe they just wanted to try something new. But months — or even years — later, they’re knocking on your door again. Turns out the grass wasn’t greener on the other side. Do you rehire them?

Historically, leaving an organization was considered disloyal, and rehiring former employees was considered taboo. However, in an age when the average employee will work for more than 12 different employers during their career and companies are grappling with a tight labor market and skill shortages, many organizations are giving consideration to these “boomerang” employees.

There are a few assumed benefits of rehiring former employees. First, because boomerang employees are known, some firms consider them to be less risky than first-time hires. Boomerangs also already know the job and require less training and onboarding time. Moreover, because they know what they’re getting into, boomerangs may be more committed this time and less likely to leave again. Perhaps most importantly, they may have improved thanks to the experiences they had during their time away and will bring back fresh knowledge, skills, and maturity.

Very little research has examined this staffing strategy, so we set out to see if boomerang employees were living up to those assumptions. Our research addressed two main questions: 1) Does the job performance of boomerang employees improve, stay the same, or decline upon returning to their former employer? and 2) How do boomerangs’ performance levels and turnover rates compare to the more traditional options: internally promoted employees and first-time external hires? We analyzed a large dataset consisting of eight years of archival data on over 30,000 employees who initially were hired (external hires), promoted (internal hires), or rehired (boomerang employees) into management positions at a large retail organization. In addition to job history information such as tenure and reasons for departure, the dataset included the organization’s annual ratings of managers’ job performance, based on their competencies, job responsibilities, and goal accomplishment. Here’s what we found.

Boomerang employees are more likely to turn over than both internal and external hires. This suggests that if an employee has left an organization once, they may be willing to do so again.

We were curious if the reasons boomerang employees left in the first place might provide more insight into our findings. For example, this retail company had rehired some employees who turned over involuntarily, perhaps as a way of providing a “second chance.” So, we classified the reasons for initial turnover based on whether they might be a positive indicator of future job performance (such as to continue their education), a relatively neutral indicator (such as personal reasons), or a negative indicator (such as termination due to poor performance).

We found that return performance was comparable among boomerang employees who had originally left for positive or neutral reasons. In contrast, boomerang employees whose initial turnover was for performance-related reasons did not do as well as those positive or neutral employees. Although we had hoped there would be a good “second-chance” story here, we found that behavior was consistent before and after rehiring.

So, can hiring boomerang employees still be a good investment? Our findings did support the idea that boomerang employees’ future behavior is likely to be consistent with their past behavior. As such, a boomerang is probably less risky than someone unknown because organizations can expect that boomerangs will perform similarly to the way they did before. If that performance level is acceptable, then they may be a good hire. Additionally, boomerang employees who left for relatively positive or neutral reasons initially outperformed internal and external hires. This supports the claim that boomerangs require less onboarding and may contribute more quickly than other hire types. On the other hand, boomerang employees did not appear to return with higher levels of commitment. In fact, they turned over at a higher rate than other types of employees — more than twice as much as internal promotions.

These factors (risk tolerance, initial turnover reasons, time horizon to performance, and need for stability) are all important for organizations to consider when evaluating whether to rehire or look elsewhere. The table below summarizes the implications of these considerations based on an organization’s objectives in the hiring process. For example, predictability of job performance may be highest among boomerang employees, somewhat lower among internal promotions, and lowest among external hires.

It's hard to read that letter now and think LeBron would willingly go back to work for Gilbert.

On July 11, 2014, four years after taking his talents to South Beach, LeBron James ultimately decided he had unfinished business in Cleveland and returned to his original team via free agency.

James’ announcement ended weeks of speculation about his future with teams across the league waiting on his move. 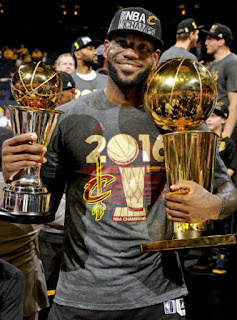 Two years later, James fulfilled his goal when he led the Cavaliers past the Golden State Warriors in the 2016 NBA Finals, ending a 52-year major sports championship drought in Cleveland.

“CLEVELAND! This is for you!” James bellowed in his postgame interview before being announced as Finals MVP.

James played two more seasons for the Cavs, reaching The Finals two more times, before agreeing to a free-agent deal with the Los Angeles Lakers on July 1, 2018.

Although it would be interesting to know how employees who have been laid off do when they return (especially given the mass layoffs resulting from Covid-19), our data did not include layoffs, and some of our findings may not apply to that group of boomerang employees. For example, we don’t know whether employees who have been laid off and are later rehired would turn over more than other hire types. Given what we do know so far, in general, we would recommend rehiring good performers who had previously been laid off.

The bottom line is that boomerang employees are likely to be about the same as they were before, rather than better or worse, upon rehiring. So, don’t just believe the hype. First, consider your organization’s objectives, and if predictability, short-term performance, and lower training costs are your goals, boomerang employees may be right for you.